Conductor Licking and Fall of Potential

It Seemed Like a Good Idea at the Time 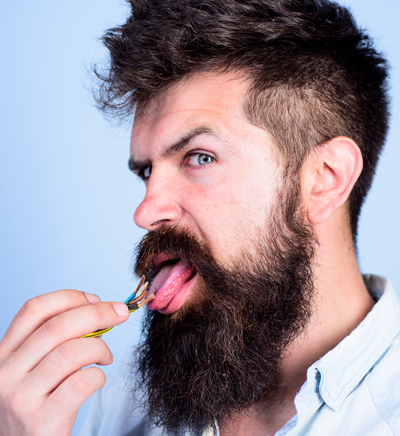 The 1953 American Electricians’ Handbook advises that electricians “test circuits for the presence of voltage by touching the conductors” – with either their fingers or their tongues. The handbook even warns, “some men can endure the electric shock that results without discomfort whereas others cannot.”

Since the mid-twentieth century, the physical world around us has changed dramatically. Even in rural areas, it’s nearly impossible to find yourself standing in a spot that isn’t electrically influenced by something in the area. FOP requires the site under test to be isolated, but neighboring infrastructure like overhead wires, underground pipes, gas lines, cables, train tracks, grounding systems at surrounding facilities, etc. can all affect the grounding system being tested and produce results that can’t be trusted. A reliable FOP test is simply not feasible in the densely built environment we find ourselves today.

Fortunately, the “touching” approach to voltage testing has evolved to safer and more effective methods. But despite its known limitations, FOP remains the most common method of measuring a grounding system. That’s why, in 2012, IEEE updated Std 81™, which addresses grounding system testing.

FOP in a Nutshell 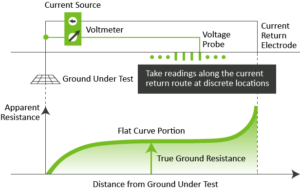 The test provides a reading of apparent resistance by dividing the voltage by the injected current (Ohm’s Law). On small, isolated grounding systems, a properly configured FOP test can produce accurate results. At larger sites, setting up an FOP test is much more complex, and it’s even harder to know if you are truly isolated.

For it to work correctly, the current return electrode must be placed at a distance from the system under test that is at least five times the diagonal dimension of that system. Otherwise, it may not be outside of the sphere of influence of the grounding system under test, which can lead to inaccurate results. On large sites, this can literally be a mile or more away (so make sure you bring a really big spool of wire).

Factors that adversely impact the accuracy of FOP results, but are difficult to identify and quantify include:

Hood-Patterson & Dewar CEO Mike Kline, PE explains, “My main concern about the FOP method is that I can’t be sure that the test results are accurate because in the real world, the test graph seldom looks like the ideal graph depicted in grounding manuals. Worse yet, if the results are not accurate, the inaccurate resistance value will typically be lower (better) than the real value.” He continues, “This false sense of security can get a design engineer into some real trouble.”

FOP in a 21st Century World

FOP testing is generally not suitable for measuring large grounding systems. It should never be performed on energized or interconnected systems, since FOP requires the site under test to be isolated from all interconnecting grounding systems, including utility feeds, incoming communications cables, and underground pipes. Additionally, nearby infrastructure such as overhead wires, train tracks, grounding systems at neighboring facilities, etc. can all adversely affect the test and produce results that can’t be trusted.

“It might sound easy on paper,” Kline explains, “but trying to isolate a grounding system from all of its external grounding system connections so that you can test it properly can be very challenging since some of the connections to other systems may be hidden (inside walls) or buried where you can’t easily access them.”

IEEE recognized that a reliable FOP test is often not feasible in today’s densely-built environment. In 2012, it updated Std 81™ to prescribe a better approach – a “computer-based grounding multimeter.” The standard explains, “the fall-of-potential method is the most popular method of measuring the resistance of ground electrodes and has been widely used for many years. However, there are many variables and situations that can distort test results and greatly reduce the accuracy of these measurements. In recent years, a computer-based ground meter has been developed that can moderate the effect the variables have on test results and improve the accuracy of the measurements.”

The SGM test system is just that system. It’s a computer-based test method developed by Sakis Meliopoulos, Ph.D., professor at the Georgia Institute of Technology, under a grant from the Electric Power Research Institute (EPRI). The SGM can test all aspects of an existing grounding system, including resistance and impedance, without having to de-energize or isolate it. 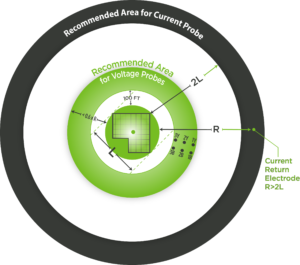 The SGM is a combined variable-frequency current source and a seven-channel data acquisition platform. Its software allows the operator to select the function or test to be performed, change test parameters, and define the geometry of the system under test. It also allows the operator to identify the positions of the current return electrode and six voltage probes via their GPS coordinates relative to the grounding system.

The seven-channel platforms (one for the injected current and six for individual voltage measurements) allows more data to be collected during current injection and improves test accuracy and allows for the statistical analysis of the data.

While the SGM follows the basic principles of FOP, it also emphasizes the simultaneous potential differences between the six voltage probes and their unique voltage profile relative to the grounding system. By concentrating on voltage differences, the current return electrode doesn’t need to be placed as far away as it does using FOP; it only requires a distance of two times the grounding system diagonal, which significantly reduces testing time.

Using the SGM software, the operator models the grounding system (or imports a model) incorporating appropriate grounding system attributes such as conductor type, size, depth, and number of interconnected ground rods. She also designates the positions of the current return electrode and six voltage probes in the model and relative to the grounding system. Then the software performs a series of voltage lead calibration checks, gathering data pertaining to the capacitance and inductance of the leads and the voltage probe-to-earth resistance. These results are displayed prior to the current injection tests so the operator can correct probe issues, if any. Other test methods, which don’t provide this information, leave the operator to assume that there are no issues that would adversely affect the quality and accuracy of the test data, even when there may be.

After calibration, the current injection tests begin. The SGM injects current into the grid through the earth to the current return electrode while the software captures data from 10 separate current injections across the operator-selected frequency spectrum (e.g. 0-250 Hz), simultaneously recording earth potentials and phase angles. The data is summarized in a data acquisition performance table, which quantifies and qualifies data for each voltage channel:

The software filters out electronic noise, compensates for errors, and reports on the coherence and quality of the measured data. It also compares measured voltage gradients to the modeled and calculated voltage gradients. Modeled gradients are based on “perfect world” conditions where the soil resistivity is homogeneous, the ground conductors are perfect conductors with no resistance, and there is zero interference or noise. In the real world, however, soil resistance is never homogeneous, ground conductors are imperfect conductors, and contiguous infrastructure impacts test results. The software then presents the operator with the impedance and phase angle for the system under test along with a statistical analysis that estimates measurement error or confidence level in these measurement data.

Time for a Better Approach

For years, when we see people either setting up an FOP test (or having already performed one), it’s wrong at least 90% of the time. Either the system is energized and not isolated, or the probes are nowhere near far enough away to deliver accurate results. This begs the question: Why on earth would anyone specify or conduct FOP testing when results are all but guaranteed to be questionable at best?

Contact us for more information on grounding system design and assessments.